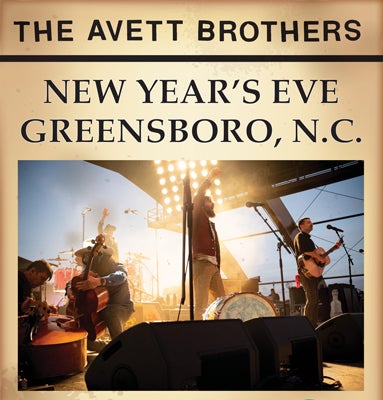 The Avett Brothers returning to Greensboro on New Year's Eve

Tickets will go on sale Friday, July 12 at 10 a.m.at Ticketmaster and the Greensboro Coliseum Box Office.

During 2009, THE AVETT BROTHERS made mainstream waves with their lauded major label debut, I and Love and You. It landed at #16 on the Billboard Top 200 and garnered unanimous critical acclaim from Rolling Stone, Paste, New York Times, Los Angeles Times, and Time, who even dubbed it one of Top 10 albums of the year.

2012 saw The Carpenter hit #4 on the Billboard Top 200—their highest bow to date—while People, USA Today, and American Songwriter lauded the album. The group graced the stage of Jimmy Kimmel LIVE! twice in merely a few months' time. During the second performance, they invited the Brooklyn Philharmonic Orchestra along to pay homage to Brooklyn with "I and Love and You" as personally requested by Mr. Kimmel.

Their eighth studio album, Magpie and the Dandelion, went on to debut at #5 on the Billboard Top 200, while they performed on The Tonight Show with Jay Leno and The Late Show with David Letterman as well as joining legendary Soundgarden singer Chris Cornell for a rapturous Pearl Jam tribute on Late Night with Jimmy Fallon.

In June 2016, the Avetts released their 9th studio album, True Sadness.  The Rick Rubin produced album debuted at #1 on Billboard’s Top Albums Chart,  #1 Top Rock Albums Chart, #1 on the Digital Albums Chart and #3 on Billboard’s Top 200 Chart. A review from Entertainment Weekly praises the release for featuring the band’s trademark “twangy guitars, feel-good harmonies, and strings courtesy of cellist Joe Kwon,” along with some new sounds like the “galloping synth beat and tempo shifts” in the track “You Are Mine.” “Such experimentation is short-lived, but it’s a shot of energy that keeps the rest of the album from dragging,” EW says.

True Sadness was nominated for 2 Grammy Awards: Best Americana Album and Best Americana Roots Performance for “Ain’t No Man”. Additionally, the album was the most played album on Americana radio stations in 2016, according to the Americana Music Association, while “Ain’t No Man” held the #1 slot at AAA radio for several weeks.

On June 13th, The Avett Brothers released their new video for “High Steppin,” the first song released from the their upcoming studio album, Closer Than Together, to be released on October 24. The video can be seen here:  https://www.youtube.com/watch?v=iwebrzEldA0.