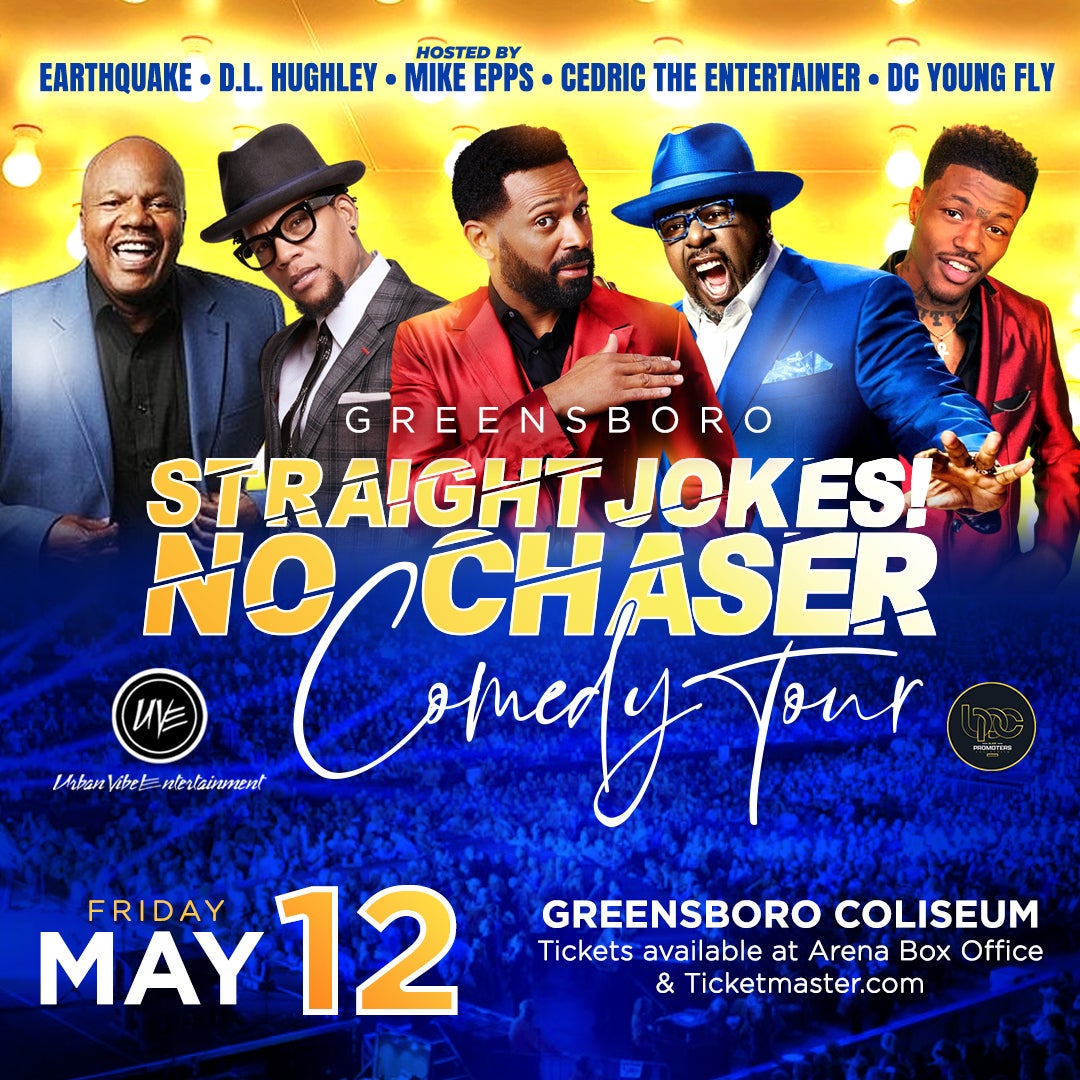 In partnership with Urban Vibe Entertainment, The Black Promoters Collective is happy to announce their first Comedy tour, "Straight Jokes, No Chaser Comedy Tour." The event hosted by Mike Epps features standup comedy greats Cedric The Entertainer, Earthquake, D.L. Hughley, and DC Young Fly. Selling out arenas with their R&B tours this past year, the collective is now expanding its promotion into the comedy industry with this 23-city tour. The tour stops at Greensboro Coliseum on Friday, May 12.

Tickets go on sale Friday, January 20, at 10 a.m. and start at $59.50. Tickets can be purchased at Ticketmaster and the Greensboro Coliseum Box Office.

Actor and comedian Mike Epps has been known to bring down the house with non-stop laughter for his unforgettable nights of comedy. Best known for playing Day-Day Jones in "Next Friday" and its sequel, "Friday After Next," Epps has generated an extraordinary amount of buzz among his peers for being not only one of the funniest comic actors but also for his burgeoning dramatic and acting talent. Epps is currently starring in the Netflix comedy series "The Upshaws" and recently dropped a special on Netflix earlier this year called "Mike Epps: Indiana Mike."

Cedric Antonio Kyles, better known by his stage name Cedric the Entertainer, is an American actor, comedian, and game show host. He hosted BET's "ComicView" during the 1993–94 season and "Def Comedy Jam" in 1995. He is best known for co-starring with Steve Harvey on the famed sitcom "The Steve Harvey Show," as one of The Original Kings of Comedy, and for starring as Eddie Walker in "Barbershop." He hosted the 12th season of the daytime version of "Who Wants to Be a Millionaire" in 2013–14 and starred in the TV Land original series "The Soul Man," which aired from 2012 until 2016. He has also done voice work for "Ice Age," the "Madagascar" film series, "Charlotte's Web," and the "Planes" franchise. He has recently been a part of multiple TV Series, including "The Neighborhood" from 2018-22 and "Woke" from 2020-22.

Comedian, actor, and voice-artist Earthquake earned a solid fan base in standup comedy via programming platforms fueled by BET, HBO, Comedy Central, Showtime, and more. Born Nathaniel Stroman, 'Quake' (as he's known by fans) entered America's households on the classic run of BET's "Comic View" and HBO's "Def Comedy Jam." In addition, Earthquake wowed audiences with one of his most memorable performances for HBO's coveted 30-minute comedy special series, ​"One Night Stand," and has filmed a string of other comedy specials, including "About Got Damn Time," "Walter Latham Presents," "From the Outhouse to the Whitehouse" and more.

One of the most popular and universally recognized standup comedians on the road today has also made quite an impression in the television, film, and radio arenas. D.L. Hughley can currently be heard nationwide as the host of his afternoon radio show, "The DL Hughley Show," nationally syndicated in over 60 cities across the country. A New York Times best-selling author, D.L. Hughley has written various books, including "How to Survive America," "Surrender, White People," "Black Man, White House: An Oral History of the Obama Years" and "How Not to Get Shot." In addition, D.L. Hughley continues to dominate the standup stage, producing specials for Netflix, Showtime, and HBO.

John Whitfield, better known as DC Young Fly, is an internet personality, comedian, actor, host, rapper, and singer-songwriter best known for his "roasting sessions" videos on Instagram and Vine. His videos earned him co-signs from celebrities like Kevin Hart, Michael Blackson, Lebron James, Chris Tucker, etc. DC has starred in films such as Almost Christmas (2016), She Ball with Nick Cannon, and I Got the Hook Up 2 with Master P (2019). In addition, he was a recurring cast member on the improv comedy show Wild' N Out on MTV, VH1, and MTV2; and a main host for the revival of TRL on MTV from 2017 to 2018. As a musician, DC has also taken the reins in the music industry, reaching the Top 10 on iTunes R&B wIth his 12th mixtape, TRAPSOUL, and opened for Chris Brown's "Party Tour" (2017). In 2021, he opened his improv comedy club, "DC Comedy Exchange," in Miami Beach, Florida. Most recently, DC filmed alongside Jacob Latimore (The Chi) and Rotimi (Power) in the 2023 remake of the 1990 film of the same name, House Party, which was released last Friday, January 13.