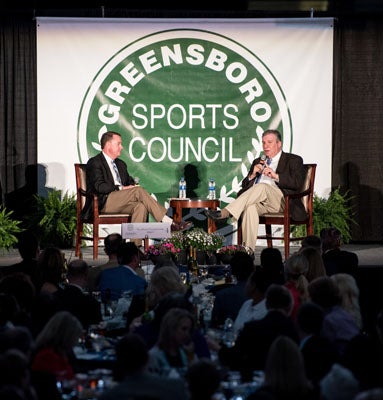 “Without the generous support of organizations such as the Greensboro Sports Council, the Learn-to-Swim program would not have been able to impact thousands of children from Guilford County Schools since its inception,” said Greensboro Aquatic Center manager Susan Braman. “We appreciate the Sports Council’s leadership and continued support in creating and raising additional funds for the Matt Brown Learn-to-Swim Endowment and helping us bring life-saving skills to more children in our community.”

“The Matt Brown Learn-to-Swim Endowment is quite possibly the most important endeavor in our history,” Greensboro Sports Council president Rob Goodman said. “We are proud to raise money for high schools in Guilford County through the HAECO Invitational high school basketball tournament, but with the Matt Brown Learn-to-Swim Endowment, we’re supporting the Greensboro Aquatic Center’s efforts to save lives by teach kids how to swim – it doesn’t get more important than that.  Thanks to title partner the Wyndham Championship and reception partner BB&T as well as our supporting partners and everyone that purchased tables or individual seats as part of this effort to raise funds for Learn-to-Swim.”

Barakat joined the Atlantic Coast Conference in 1981 as the supervisor of men’s basketball officials.  He was later named assistant commissioner and was then promoted to associate commissioner, director of men’s basketball. For 16 years he served as the ACC Men’s Basketball Tournament director along with his other basketball responsibilities that included scheduling, managing the league’s television partners and officiating. He passed away in 2010.

In addition, the Council hosts the HAECO Invitational high school basketball tournament each December.  Founded in 1976, this annual event donates its proceeds to charity and the participating schools each year.