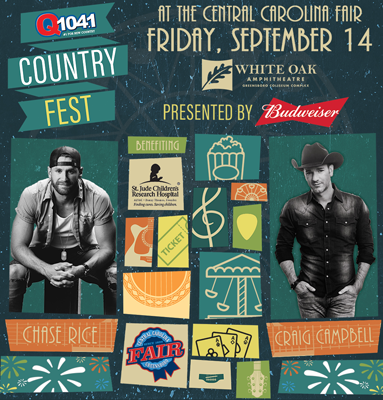 A limited number of reserved tickets will go on sale Friday, August 10 at 11 a.m. at www.ticketmaster.com and the Greensboro Coliseum box office. Reserved tickets are $25 and include admission to the Central Carolina Fair.

Chase Rice has become one of country music’s most exciting figures since arriving in Nashville, building a loyal fan base across the country through his energetic live shows and gaining the attention of music critics and industry professionals alike with his edgy, eclectic sound. The Tar Heel State native has inked a new label deal with Broken Bow Records and is putting the finishing touches on his sophomore album, Lambs & Lions, in stores November 17. Rice’s debut album Ignite the Night debuted at No. 1 on Billboard’s Top Country Albums and No. 3 on the all-genre chart, and produced a pair of Top 5 hits, the Platinum-certified "Ready Set Roll" and “Gonna Wanna Tonight.”

With easy charisma and smooth, expressive vocal chops, singer-songwriter Craig Campbell has earned comparisons to neo-traditional icons like Alan Jackson and Randy Travis. Campbell’s hits include “See You Try” and “Outskirts of Heaven” and his singles “Family Man” and “Outta My Head” both cracked the Top 15 on Billboard’s Country Airplay chart.