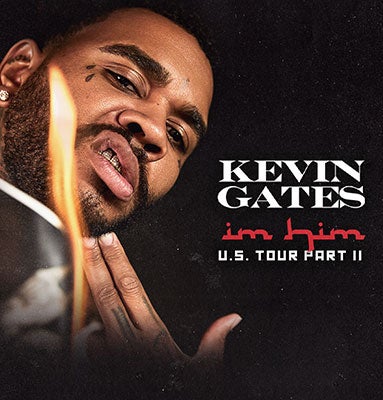 Today, on his birthday, multi-Platinum recording artist Kevin Gates unveiled one of his most personal and special tracks yet. Gates wears his heart on his sleeve on the romantic track “Dreka,” named for his wife, manager, business partner and mother of his two children – affectionately known as #bossmaynedrek. Listen to “Dreka” HERE. Watch the visualizer for “Dreka” HERE.

Yesterday, the prolific rapper announced his North American tour dates for “I’M HIM Part 2 Tour.” The tour kicks off at Denver, CO’s iconic venue, Red Rocks Amphitheatre, on May 19th. Gates is slated to perform at El Paso, TX’s Neon Desert on May 23rd and wraps his tour with an incredible performance at Manchester, TN’s Bonnaroo Music & Arts Festival on June 13th. Artist presale began 2/4 at 12PM local time and will continue through 2/6 10PM local time; Songkick presale will begin 2/5 at 10 AM local time and run through 2/6 at 10Pm local and venue presales will run 2/6 from 10AM to 10PM local time. Tickets for the “I’m Him Part 2 Tour” go on sale to the general public Friday, 2/7 at 10AM local time. See full itinerary below. For complete details, please visit www.kvngates.com/tour.

Kevin and Dreka Gates recently teamed up to create the short film for Kevin’s track “Fatal Attraction” of his chart-topping album I’M HIM -- watch the visual HERE. The unstoppable power couple went on Complex’s Everyday Struggle for a rare and exclusive joint interview to speak about the Louisiana heritage and the voodoo culture that inspired the film, which was shot in New Orleans. The incredibly adorable and informative, must-see interview is streaming now HERE.

“Dreka” follows Gates’ critically acclaimed I’M HIM which arrived last year. The album debuted at #1 on the Billboard R&B/Hip-Hop Album Sales chart and at #4 on the Billboard 200 chart, giving Gates his fourth top 10 album. Pitchfork raved about the impressive showing from Gates by stating “seventeen songs with no guest features should be a recipe for exhaustion, yet there's hardly a trace of fat on I’M HIM.”

The Kevin & Dreka Gates Foundation – founded by the dynamic duo– partnered with The Crystal Campaign, a global movement of healing with the mission to make mental health as common and important of a conversation as physical health. Gates, who has always shared his struggle with mental health through his raw and emotional lyrics, has announced a “Walls Talking” inspired merch line that will raise funds for the Kevin & Dreka Gates Foundation which seeks to raise awareness and advocate for policy changes that support the mental health of formerly incarcerated people. Shop the full line HERE.