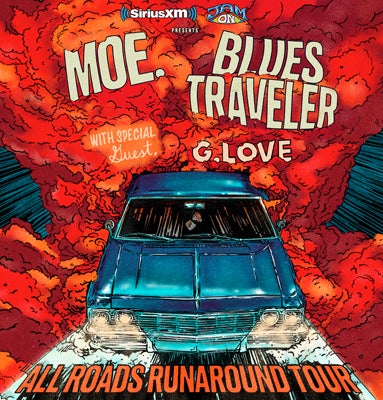 Preeminent progressive rock band moe. and legendary platinum-selling band Blues Traveler have announced they will be hitting the road together across North America on the All Roads Runaround Tour presented by SiriusXM JamON. The summer run will showcase one set from each band plus a very special collaborative set each night. Special guest G. Love will join as support.

moe. just wrapped up a short tour at New York City’s landmark venue, the Beacon Theatre. John Popper joined the band on stage and the artists sat down to discuss the upcoming run.  That interview and highlights from the performance can be seen HERE.

Moe. and Blues Traveler will play White Oak Amphitheatre at the Greensboro Coliseum Complex August 6. Tickets go on sale to the general public beginning Friday, March 1 at 10 a.m. at LiveNation.com.  A limited amount of VIP packages will also be available and include premium ticket locations, early entry into the venue, an exclusive tour poster signed by members of moe. and Blues Traveler and other merchandise items. Citi is the official presale credit card for the tour. As such, Citi cardmembers will have access to purchase presale tickets beginning Wednesday, February 27 at 10:00 a.m. until Thursday, February 28st at 10:00 p.m. through Citi’s Private Pass program. For complete presale details visit www.citiprivatepass.com.

With nearly 30 years of touring, 11 studio albums and a plethora of live releases under its belt, the quintet of Al Schnier and Chuck Garvey on guitars and vocals, Rob Derhak on bass and vocals, Jim Loughlin on percussion and vibes, and Vinnie Amico on drums, has long since established itself as a favorite of the jamband and improvisational rock scene. Critical acclaim and a solid national and international fan base has built a dedicated following that grows each year. Whether touring across the globe, headlining or producing their own music festivals, or sharing the stage with such celebrated acts as The Allman Brothers, The Who, or Robert Plant, among others, what keeps moe. at the forefront of the music scene is not only the energy and vitality of their music and songwriting, but the showmanship in which it is delivered.

About Blues Traveler:
30 years ago, the four original members of Blues Traveler, who had known each other since their early teens -- John Popper, Chandler Kinchla, the late Bobby Sheehan and Brendan Hill -- gathered in the basement of their drummer's parents' Princeton, NJ, home and the seeds were planted for a band who has released a total of 13 studio albums, four of which have gone gold, three platinum and one six-times platinum. Over the course of its illustrious career, Blues Traveler has sold more than 10 million combined units worldwide, played over 2,000 live shows in front of more than 30 million people, and, in "Run-Around," had the longest-charting radio single in Billboard history, which earned them a Grammy® for Best Rock Performance by a Duo or Group with Vocals. Their movie credits include Blues Brothers 2000, Kingpin, Wildflowers and others. A television favorite, they have been featured on Saturday Night Live, Austin City Limits, VH1's Behind the Music and they hold the record for the most appearances of any artist on The Late Show with David Letterman.

About G. Love:
Garrett “G. Love” Dutton is celebrating his 25th year as touring and recording artist. With over 15 records released, G. Love has been an influence to artists such as Jack White, Jack Johnson, The Avett Brothers, Slightly Stoopid and many more. With his signature blend of Delta Blues, Hip Hop, Funk, Rock and Roll and Jazz, G has literally created his own funky stew of American music. Expect a high-energy mashup of funky vibes and songs written from the front porch to get the world smiling and dancing to the positive message of Love and the Blues.