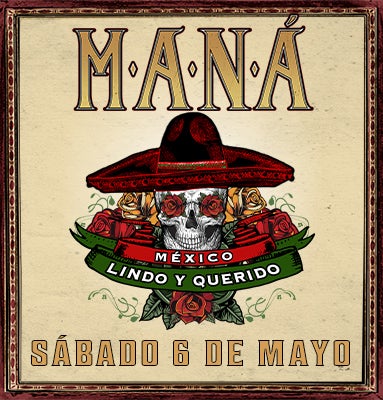 Following their record-breaking LA arena residency and their Latin America stadium run, MANÁ announces the 2023 leg of their tour – México Lindo Y Querido – featuring 19 shows across the U.S. Produced by Live Nation, the U.S. tour kicks off with two more dates of MANÁ’s historic LA residency at the Kia Forum on February 10th and 11th and includes a Saturday, May 6 date at Greensboro Coliseum.

México Lindo y Querido kicked off in Latin America on June 10th in Tijuana, México with multiple nights in Medellin, Bogota, Puerto Rico and México. The five-city México run brought the band to sold-out stadiums with over 150,000 fans, including 60,000 ecstatic fans at the prestigious Foro Sol stadium in México City. To kick off the announcement of their US leg, MANÁ will host a special tour launch party tonight at Las Vegas’ Mandalay Bay Beach featuring a special live performance from the band.

Their tour is a timeless celebration of the group’s love and admiration for México and the multigenerational Latino community as a whole. Over three decades, MANÁ has amassed a diverse audience of fans of all ages that continue to celebrate their music around the globe.

“Get ready, we’re coming with a brand new production and all our hits. We’re excited to be back on the road and see all our fans in the US. This isn’t just a concert tour, it’s a celebration of life.” - MANÁ

The México Lindo y Querido U.S. run comes on the heels of MANÁ’s record-breaking residency with 12 sold-out shows and 165,000 tickets sold to date. MANÁ has shared the stage with special guests including Joe Walsh of The Eagles along the way, as well as performing two special nights in celebration of Fiestas Patrias in September. The residency has garnered a multitude of positive reviews from fans and critics over the first 12 shows, and the band has promised to continue playing Los Angeles into 2023 as fans demand more dates.