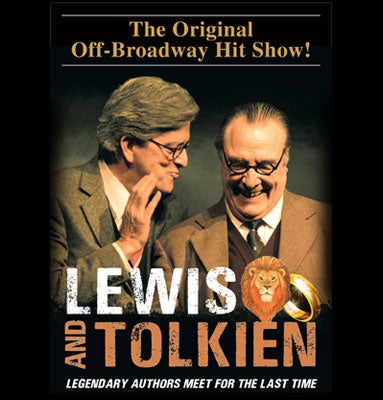 Playwright David Payne unpacks the friendship between fantasy trailblazers C.S. Lewis and J.R.R. Tolkien. Lewis & Tolkien, Of Wardrobes & Rings is a play set in Oxford’s Eagle & Child pub. Aging and legendary authors, J.R.R. Tolkien and his great friend C.S. Lewis, meet for what turns out to be the very last time.

They were lions of 20th century British fantasy, giants of a literary genre that reached millions of readers, young and old alike, with mystifying adventures to entertain and deep truths to move people’s hearts. C.S. Lewis (The Chronicles of Narnia) and J.R.R. Tolkien (The Lord of the Rings) were also distinguished faculty members at Oxford University and participants in a literary group known as the Inklings. Their robust philosophical discourse served an uncommon friendship that was not without its differences. Life’s circumstances and, sometimes, unresolved disagreements forced an uncomfortable season of estrangement.

In Lewis & Tolkien we join “Jack” and “Tollers,” as they knew each other, at Oxford’s historic Eagle and Child pub for one last visit, tempered by thawing humor, confession and reconciliation.

David Payne [C.S. Lewis] has been dazzling audiences across the world with his one-man drama An Evening with C.S. Lewis with over 700 performances over almost 20 years. It all began in 1996 when auditions for the play Shadowlands, based on the life of Lewis, came about with the notice, "British accents help!" Well that he had, and it won him the role of Lewis. After the show closed, Payne created a one-man production based on Lewis' novel A Grief Observed that opened to sold out audiences. This led Payne to his An Evening show and then on to write a multitude of Lewis inspired productions. If you have ever wished to sit in a room with Jack himself speak, Mr. Payne is as close as you can get.

Gordon Tett [J.R.R. Tolkien] has worked in professional theatre and TV as an actor, writer, and director since the age of thirteen. English by birth, his career has brought him around the globe, from Australia, to London's West End, and across the U. S. He formed the Arts Centre Theatre Studio in London and ran his own company, Cornerstone Theatre Studio. His C.S. Lewis journey began in 2003 with his one-man staged version of The Great Divorce, and later created the role of Warnie, Lewis' brother, in St. Jack and the Dragon by David Payne.