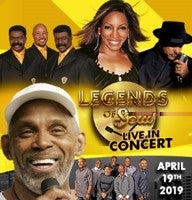 Maze featuring Frankie Beverly have created a unique sound, becoming one of the most influential groups in modern history.  The journey began when Beverly relocated from his hometown of Philadelphia to San Francisco and formed Maze.  In 1976, he released his first album Maze Featuring Frankie Beverly which yielded a string of hit singles, including "Lady of Magic" and "Workin' Together."  The 1980's brought the release of the best-selling albums, Golden Time of Day, Inspiration, Joy and Pain, containing a list of chart-topping singles, including "Travelin' Man," "Feel That You're Feeling," "Joy and Pain," "Look in Your Eyes" and "Southern Girl.” The group gained worldwide appeal with its legendary sold-out live appearances and released the deluxe album Live in New Orleans which captured the energy, excitement and electricity of a Maze stage show and offered a fourth side of new studio material which included the hit single "Running Away."

In 1983, with the release of We Are One, Frankie Beverly & Maze solidified their international standing with such hits as the title track "Never Let You Down", "I Love You Too Much" and "Love is the Key." As the 80's came to a close, the group released Can't Stop the Love and a second in concert package, Maze Featuring Frankie Beverly Live in L.A., which served both as a retrospective of the group's remarkable career to date and a fitting close to the first chapter of the Maze legend.  The band then released Silky Soul, one of its most successful albums, which included the smash singles, "I Can't Get Over You" and the title track.  Back to Basics followed, which captured the passionate, electrifying essence of the group, and included the hit singles, "Laid Back Girl," "The Morning After" and "What Goes Up."

Maze Featuring Frankie Beverly continues to tour the U.S. and Europe proving that their music is still unique, relevant and contemporary after three decades.

Stephanie Mills is a Grammy award–winning singer, songwriter and Broadway stage actress.  Mills rose to stardom as "Dorothy" in the original Broadway run of the musical The Wiz from 1975 to 1977.  The song "Home" from the show later became a number 1 R&B hit for Mills and her signature song.  During the 1980s, Mills scored five number one R&B hits, including "Home", "I Have Learned to Respect the Power of Love", "I Feel Good All Over", "You're Puttin' A Rush on Me" and "Something in the Way (You Make Me Feel)".  Mills' won a Grammy Award for Best Female R&B Vocal Performance for her song "Never Knew Love Like This Before" in 1981.

The Whispers members are twin brothers Walter and Wallace Scott and Leaveil Degree. They began their legendary and timeless career in 1963. They have produced a string of hits over the last five decades. The Whspers are considered the leading romantic group of their generation, racking up gold albums and charting numerous R&B hits. Some of their most popular hits are “(Let’s Go) All the Way”, (Olivia) Lost and Turned Out”, “And the Beat Goes On” and their most successful selling albums were “Lady” and “Rock Steady”. The Whisper continue to celebrate over 50 years in the music business by touring across the United States.