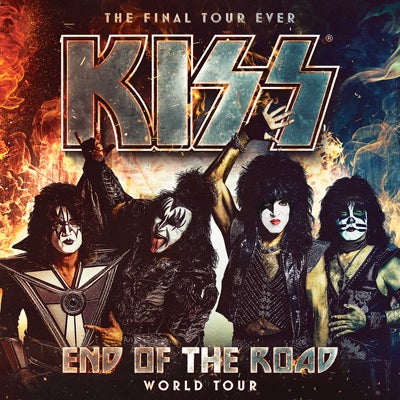 Rock n roll legends KISS have announced today that fellow rock icon David Lee Roth has been added as a special guest to the last legs of the END OF THE ROAD TOUR. David Lee Roth will bring his exciting stage show featuring a twin guitar big rock sound and a set list of classic hits and future energy.

The initial tour announcement was met with huge fan demand for added shows, but the END OF THE ROAD TOUR will officially come to a close on July 17, 2021 at a New York location yet to be named. Produced by Live Nation, the tour will continue to wow audiences in 2020 with additional concert dates including Greensboro Coliseum on Saturday February 8. Tickets are on sale now at www.livenation.com.

Known for their trademark larger-than-life blistering performances, KISS has proven for decades why they are hands down the most iconic live show in rock n roll.  The Rock & Roll Hall of Famers who have sold more than 100 million albums worldwide have said this tour is devoted to the millions of KISS Army fans.