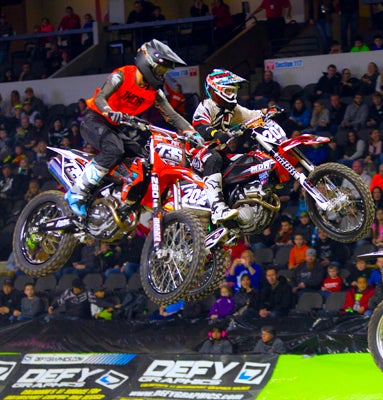 Cycle City Promotions announced the 2018-2019 Kicker Arenacross Winter Series schedule, beginning November 10th at the Lea County Event Center in Hobbs, New Mexico and commencing March 2nd at the Amarillo National Center in Amarillo, Texas. With the departure of the Amsoil Arenacross, the Kicker Arenacross has expanded to new cities and venues for the 2018-2019 version of its annual tour.

“Professional and amateur Arenacross racing is alive and thriving, and the upcoming Kicker Arenacross Winter Series will prove just that,” said Tod Hammock, president and founder, Cycle City Promotions. “We have added markets and venues to this year’s line-up that were previously held by the Amsoil Arenacross, and with more money and bigger prizes, there’s no doubt this series will be our biggest one to date.”

The new additions to the tour include the Tingley Coliseum in Albuquerque, New Mexico, the Maverik Center in Salt Lake City, Utah and the Greensboro Coliseum in Greensboro, North Carolina.

“In 2008 Kicker got involved with Tod Hammock and Cycle City Promotions, and ran headlong into a still-growing sport chock full of energy and passion; a perfect fit for our brand, said Kevin Campbell, Director of Global Marketing for Kicker Audio. “The relationship we enjoy as the title sponsor continues to grow and reward our brand. The Cycle City events are consistent, well-paced and impactful. It is our intent in 2019 to invest further in the series, as we fully expect to grow along with him.”

Race fans in attendance can anticipate the evening to consist of action-packed racing from the best of the best. Edge-of-your-seat entertainment is inevitable. Racers soar as far as 50 feet in distance, and at times reaching as high as a three-story building. All of this while navigating a challenging race course created by the best in the business, Randy Poulter, of Extreme Dirt.

Kicker Arenacross is an off-road motorcycle racing competition, occurring in top arenas across the country, with dirt brought in and man-made tracks designed using construction equipment. The nation’s most elite racers compete in what some tout to be the most physically demanding sport ever.

Both amateur and professional competitors travel the country, following the Kicker Arenacross Series, to battle for nightly event accolades and to accumulate overall series points. Anywhere from 300 to 700 riders travel to each event and compete throughout the day in qualifying races with a goal of securing their spot in the Main Event taking place that evening.