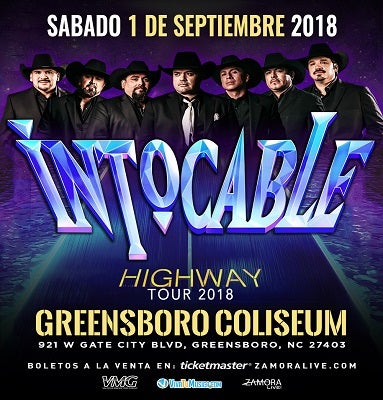 The iconic group INTOCABLE will officially conclude its Highway tour with a series of shows in the United States and Mexico, including a Saturday, Sept. 1 performance at the Greensboro Coliseum Complex’s Special Events Center.

The acclaimed Highway album, gave them one of the most fructiferous times in the history of their career, birthing six popular singles:

The incomparable group, which already has more than 1 billion views on YouTube, added 40 million more with the videos from this album.

During the two years since the launch of Highway, the group has been on a continuous tour, offering more than 200 concerts in the United States and Mexico. They managed to break records of attendance at the Monterey Arena with the most sold out dates in the history of the venue and gave a dazzling performance at the 30th edition of Premio Lo Nuestro where they celebrated being the most awarded group of its genre in the history of the award show with 23 awards in total.

In 2016, the album earned them another Latin Grammy nomination for Best Norteño Album and the prestigious SESAC Icon Award. Each single was a mainstay on the top of the radio charts and upon release, the album remained at #1 in sales for multiple weeks.

“Highway has been a tremendous adventure for us. One we are ecstatic to have been able to experience alongside our fans,” said Ricardo Muñoz, lead vocalist of the group. “There is absolutely no way to express how grateful we are for the continuous and tremendous support. We’re humbled by it and look forward to continuing to put excellent music forth for all of you to enjoy.”