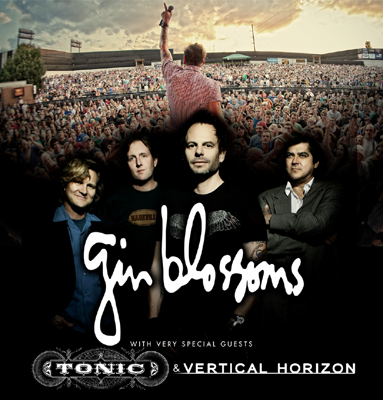 About Gin Blossoms
The Gin Blossoms have undoubtedly left their mark on the Rock music map. The Grammy nominated band's fusion of Melodic Rock, Pop, Folk and Country elements has helped pave the way for the modern Rock of today.   Fans around the world are very familiar with Gin Blossoms’ five-time Platinum breakthrough album New Miserable Experience, containing gems like “Until I Fall Away,” “Found Out About You,”  “Hey Jealousy” and “Allison Road.” Those hit tracks were followed up by the Empire Records Platinum Soundtrack hit, “Til I Hear It From You.” In 1996, the singles “Follow you Down” and “As Long As It Matters,” hit the radio again in a huge way, making their Congratulations I’m Sorry record another platinum success. Gin Blossoms hits have crossed over in five different formats, taking the airwaves by siege, and held the MTV playlist captive for most of the 90s. Boasting record sales of over 10 million, the band continues to burn up the road performing over 120 tour dates per year as they ready a brand new record release in Summer 2018. Don’t miss all these great hit songs, a sampling of new music, and a rockin’ the house down show!

About Tonic
With six top 10 singles, over 4 million records sold, multiple Grammy nominations, platinum albums, hit songs around the world including the #1 most-played rock song of 1998, it is safe to say that Tonic is a musical powerhouse. Merging the raw honesty of rock with their unabashed melodies Tonic have helped usher rock n roll into the new millennium.  Many bands would be content with that sort of history. Tonic breaks the mold.  “When we play music together it feels like going home,” explains singer and guitarist Emerson Hart. “Getting together, playing some rock-n-roll: it’s the best feeling in the world.”

About Vertical Horizon
Vertical Horizon was founded in the early 1990s, but it was seven years before lead singer Matt Scannell’s songs became the radio hits that brought the popular grass roots band to national attention. Vertical Horizon released three albums independently (There and Back Again, Running on Ice, and Live Stages) and toured extensively before signing with RCA Records in 1998. In 1999, they released their breakout album, Everything You Want, which went on to sell more than two million copies. The second single off the CD, the title track “Everything You Want,” captured the #1 spot on Billboard’s Hot 100 and Adult Top 40 charts, and became Billboard’s Most Played Single of 2000. Having carved out a page in the annals of music history the band garnered further radio attention with “You’re a God” (#4 on Billboard’s Adult Chart) and “Best I Ever Had (Grey Sky Morning).” In 2005, “Best I Ever Had” became a top 20 country hit for country star Gary Allan.