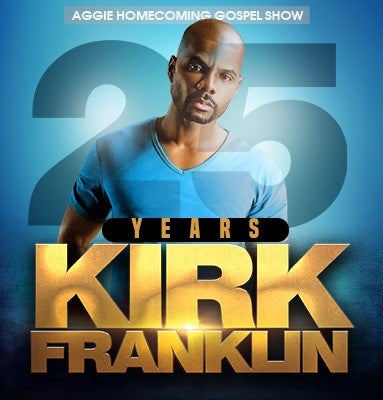 The concert, 25 years after Franklin’s first performance at N.C. A&T in 1993, will also include a performance by the N.C. A&T Gospel Choir.

An incomparable artist, speaker, New York Times best-selling author, businessman and humanitarian, Kirk Franklin is the top-selling Gospel artist in sound scan history (selling over 10 million albums) as well as a multiple Grammy award winner. In 1993, Franklin revolutionized Gospel Music and bridged the gap between the faith community and mainstream Urban Music culture. Working with such artists as Bono, Stevie Wonder, the late Whitney Houston, Lacrae, Kanye West and Chance the Rapper, the genius fusion of a message hope and hip-hop beats have made him a mainstay atop Billboard charts for more than 20 years.