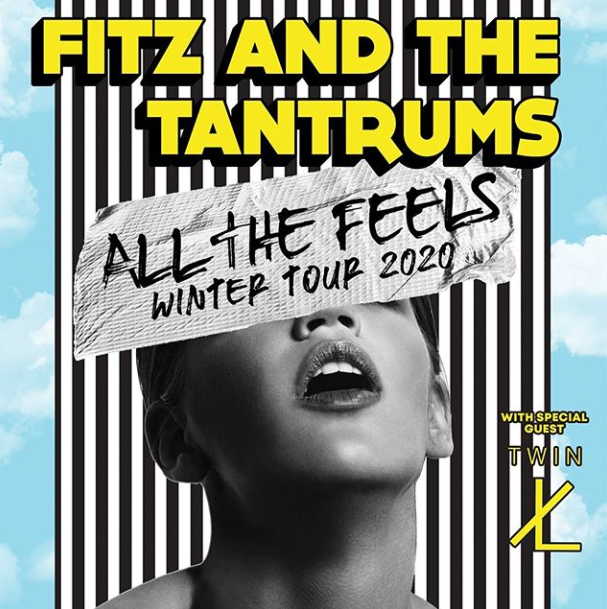 Fitz and the Tantrums to play Piedmont Hall on Feb. 12

Elektra recording group Fitz and the Tantrums have released their highly anticipated new album “ALL THE FEELS”. The album is available to stream and download now HERE. Limited edition merch bundles are available exclusively in the band’s online store HERE. Fitz and the Tantrums celebrated the album’s release by performing "I Just Wanna Shine” and "All The Feels” on the outdoor stage at ABC’s Jimmy Kimmel Live!.

Fitz and the Tantrums have also announced a 2020 headline tour, in support of their new album with Twin XL opening. The cross-country trek will kick off on February 7 and wrap on March 13. Pre-sale tickets will be available beginning Tuesday, September 24 at 8:00am local time, and general on-sale begins Friday, September 27th at 10:00am local time. Full itinerary below. For more details, please visit www.fitzandthetanrums.com.

“There is power in talking about these things that we all feel like anxiety, depression, and insecurity, but also hopefulness, love and wanting to be more connected, this is the journey that we walked to make the album All The Feels,” says co-vocalist Michael “Fitz” Fitzpatrick.

Fitz and the Tantrums began sharing music from the album with the Spring release of “123456”. The song has already been featured in high profile spots on MLB Network and was highlighted in the recent Netflix film “Otherhood.” The band also treated fans to an early listen of tracks “OCD”, “I Need Help!”, and “All The Feels” around their massive co-headline tour with labelmates Young The Giant, which wrapped last month and included a special homecoming show at The Forum in Los Angeles. Current single “I Just Wanna Shine” is climbing at Alternative radio and was just featured in Walmart’s official back-to-school campaign on both TV and online.

Multi-platinum artists Fitz and the Tantrums have quickly grown from independent upstarts to bonafide hitmakers.  The LA-based band have released their much-anticipated, fourth full length album “ALL THE FEELS,” featuring lead single “123456.”  “ALL THE FEELS” follows the band’s 2016 release “FITZ AND THE TANTRUMS,” which spawned the group’s biggest hit to date, “HandClap.” The RIAA-certified 2x Platinum single went top 5 on both the Hot AC and Alternative Radio charts, and also enjoyed major airplay across the country at Top 40.  The band has brought the infectious energy of their live shows to the small screen, with nationally televised performances of “HandClap” on ABC’s “Dancing With The Stars,” “Good Morning America,” and “Jimmy Kimmel Live!,” NBC’s “TODAY,” “Tonight Show Starring Jimmy Fallon,” “America’s Got Talent,” and Macy’s Thanksgiving Day Parade, and the syndicated “Ellen DeGeneres Show” among others.

Fitz and the Tantrums’ eponymous album followed their breakout major label debut, “MORE THAN JUST A DREAM,” which featured back-to-back Platinum-certified, #1 Alternative Radio singles in “The Walker” and “Out Of My League.”   Both singles also enjoyed Top 15 success at Hot AC.  The band has performed countless, sold out headlining shows and is always a standout at music festivals around the world, including Coachella, Bonnaroo, Lollapalooza, Austin City Limits, and more.