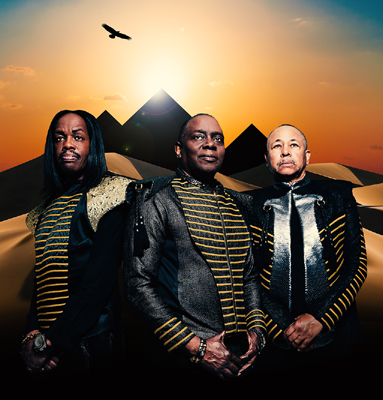 Earth, Wind & Fire, one of the world top musical groups of all-time, will appear at White Oak Amphitheatre on Friday June 8.  Tickets for the legendary Earth Wind & Fire go on-sale Friday, March 16 at 10am at LiveNation.com, via the Live Nation app, the Greensboro Coliseum box office, Ticketmaster, or by phone 800-745-3000.

Earth, Wind & Fire has become one of the world top-selling musical groups of all-time since its formation in 1969 in Chicago.  The band sold over 100 million albums world-wide.

The Earth,Wind & Fire renown signature sound is beyond music genre or category.  Their music has become the soundtrack of many lives for over four decades and will continue to have a long and lasting impact on popular culture for many generation to come.

Its founders have been inducted into Rock and Roll Hall of Fame (2000). The National Academy of Recording Arts & Science (NARAS) bestowed its highest honor, the Grammy Lifetime Achievement Award to them in 2016, totaling nine Grammy Awards.