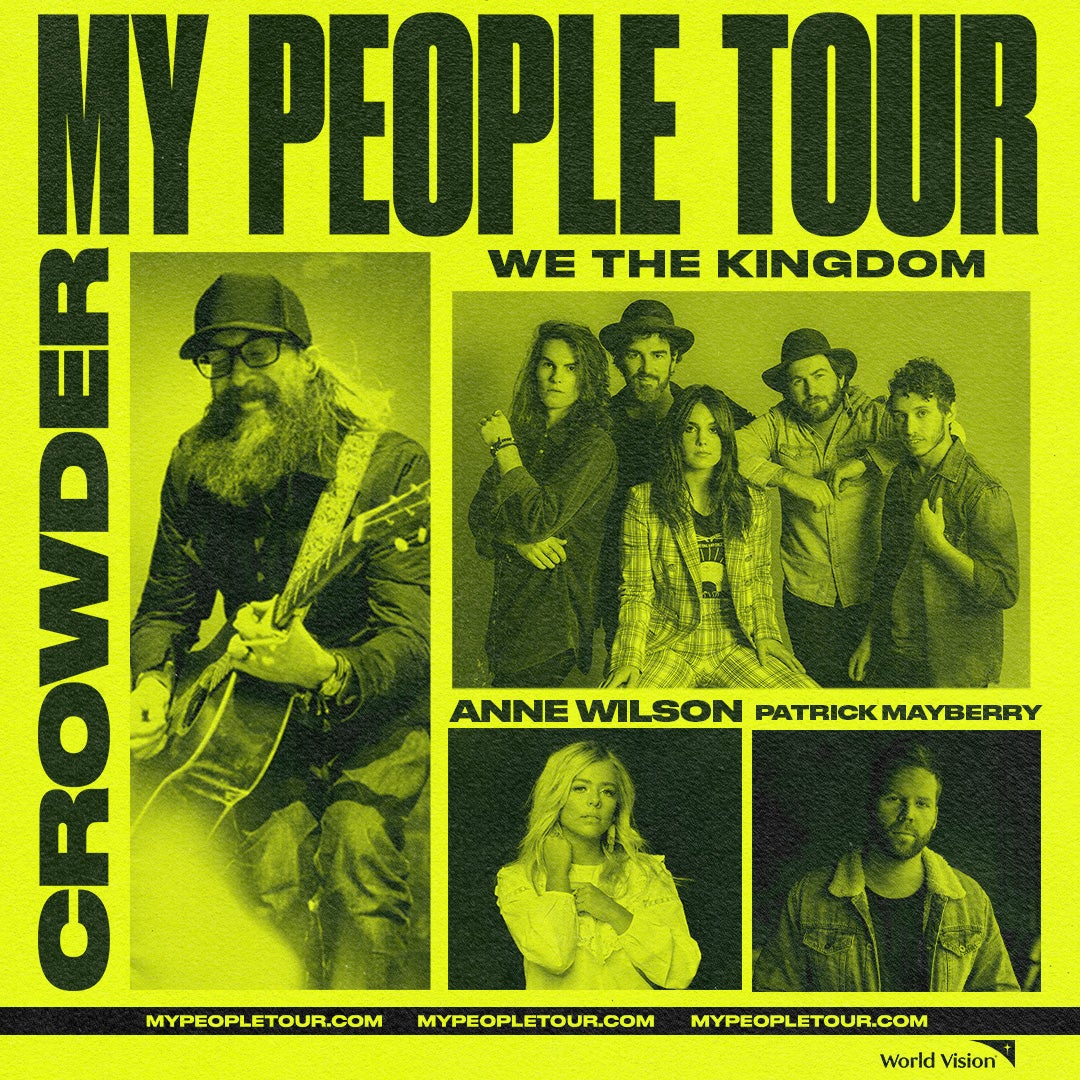 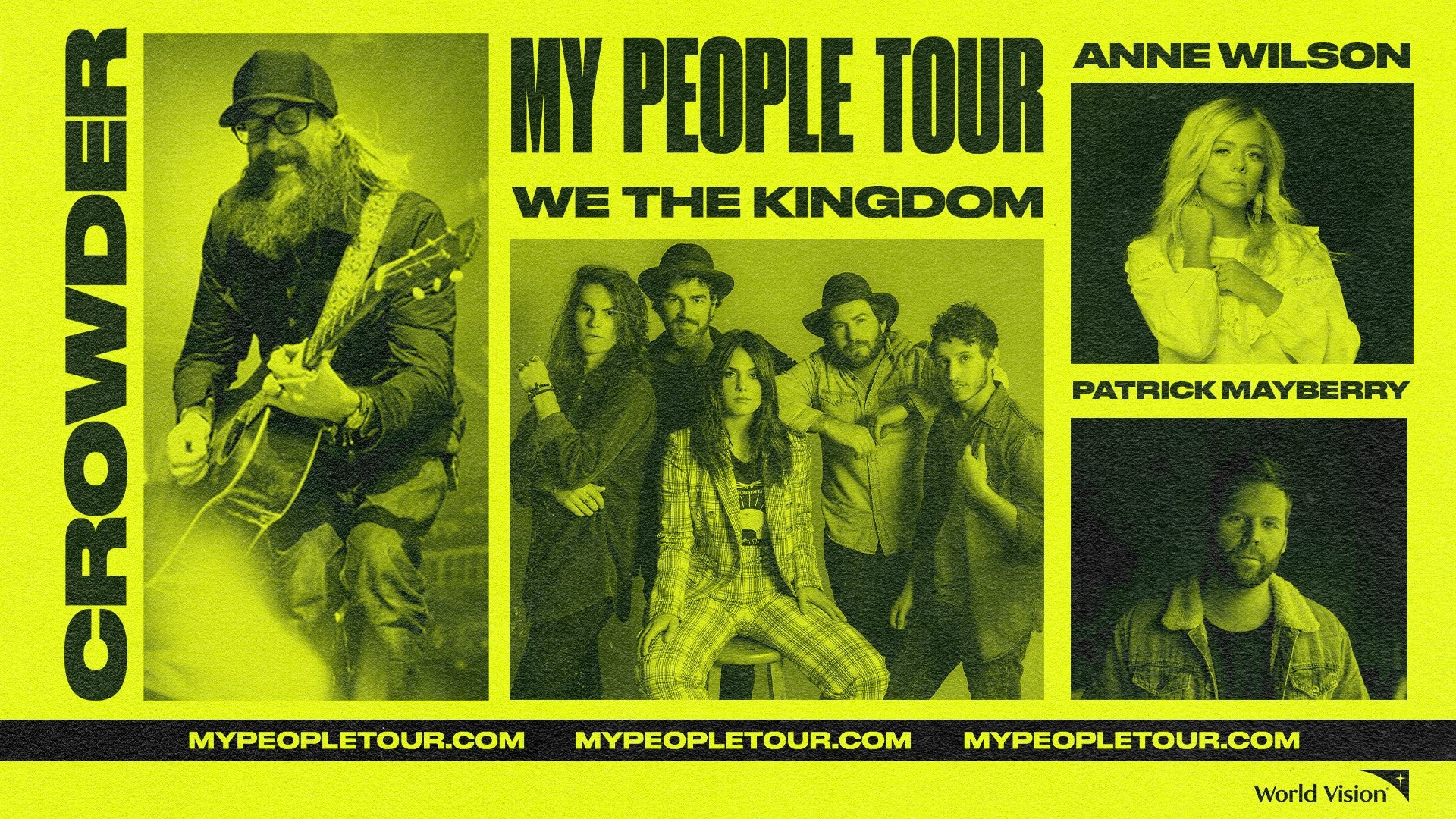 Premier Productions and Crowder announce the My People Tour with special guests We The Kingdom, Anne Wilson and Patrick Mayberry. The tour will span 11 cities - including a stop at Greensboro's White Oak Amphitheatre on Saturday, June 18 - and will see Crowder fresh off his Milk & Honey Tour.

“We’re wound up to hit the road for the My People Tour,” says Crowder. “It’s gonna be an amazing summer with all our friends! We can’t wait to see you soon!”

Along with performing some of his biggest hits, this tour welcomes the 2021 Dove Awards “Contemporary Christian Artist of the Year” We The Kingdom. The tour also features Anne Wilson, whose debut single “My Jesus” reached number one on Billboard’s Hot Christian Songs chart, and newcomer Patrick Mayberry.

“We could not be more energized to go on the road with Crowder,” says We The Kingdom. “He and his band have been some of our good friends for a while now, but this will be the first time getting to go out with them. We are looking forward to all the memories that will be made and all the powerful nights of worship we will experience with all of you!”

Audiences can sign up for the exclusive pre-sale now at mypeopletour.com. Tickets go on sale to the public on Friday, April 1st at 10 at Ticketmaster.

Over 3 Million records sold and 3 GRAMMY® Nominations. Crowder’s first solo album, Neon Steeple, debuted at No. 8 on the Billboard 200, was named iTunes 2014 Christian Album of the Year, garnered multiple radio hits, a GRAMMY® nomination for “Come As You Are”, a Grand Ole Opry debut, a Dove Award and multiple nods and numerous K-LOVE Fan Award Nominations. American Prodigal, his GRAMMY® nominated follow-up album, released in 2016, landing at No. 1 on the Christian & Gospel Album Chart, No. 3 on the Digital Albums Chart, No. 5 on Billboard’s Top Album Sales Chart and No. 12 on the all-genre, Top 200 Billboard Chart. The song “All My Hope” brought Crowder a No. 1 radio single, in addition to two Top 10 singles prior to that from American Prodigal. His third project, I Know A Ghost, hit No.1 yet again on the Billboard Top Christian Albums Chart, while also earning his third GRAMMY® nomination for Best Contemporary Christian Album. Following in the footsteps of his previous releases, Crowder’s latest studio album, Milk & Honey (6.11.21), debuted at No.1 on the Billboard Top Christian/Gospel Albums Chart, bringing about a record-breaking year of music for the Texarkana-native upon its arrival. Nominated for Pop/Contemporary Recorded Song of the Year at the 2021 Dove Awards, the project’s lead single-turned-smash hit, “Good God Almighty,” not only peaked at No.1 at Christian radio, but it also sat atop the Billboard Christian Songs Chart for five consecutive weeks and landed Crowder his first No. 1 on Billboard’s Hot Christian Songs chart. Continuing the success, the album’s sophomore single, “In The House,” became Crowder’s fourth No.1 at radio in February – marking his first time having multiple, consecutive singles from the same album reach the top of the chart, overall. With recent press highlights including GMA, Fox & Friends, Wall Street Journal, PEOPLE Magazine, SPIN, American Songwriter and many more, Crowder released the 18-track expansion ‘Milk & Honey (Deluxe)’ on March 4.

About We The Kingdom:

We The Kingdom is a multigenerational family of musicians including producers and songwriters Ed Cash (Working with artists like Chris Tomlin, NeedToBreathe, Bethel Music), Scott Cash, Franni Rae Cash, Martin Cash and Andrew Bergthold. The members of We The Kingdom have been involved behind the scenes in songs that have been sung around the world and now are ready to tell their own story firsthand. Their sound is a blend of worship, vulnerability and grit that is birthed out of decades of musical influences and a shared difficult experience that brought them together as a band. Their debut EP came out in the fall of 2019.

Singer/songwriter Anne Wilson knows the healing power of music firsthand. The lyrics of Hillsong Worship’s “What A Beautiful Name” became a lifeline for the Lexington, Kentucky native after her brother was tragically killed in a car accident at the age of 23. Although she spent much of her childhood behind a piano, Wilson sang in front of an audience for the first time at her brother’s funeral. It was in that moment that she realized what she was born to do. A video of her moving performance organically circulated, eventually landing her a record deal. With a mesmerizing voice and a visible hunger for Jesus, the 19-year-old relies on personal journal entries and time spent in nature for songwriting inspiration. Her rootsy sound reflects her strong southern upbringing and her admiration for country royalty like Johnny Cash and Dolly Parton married with the heart-on-your-sleeve transparency of Steffany Gretzinger and Lauren Daigle. Wilson’s introductory track, “My Jesus”—which she co-wrote with Jeff Pardo and Matthew West—is a warm invitation to experience her Savior in the same intimate way she knows Him. She’s currently working on a debut three-track single—also titled My Jesus—for Capitol Christian Music Group.

Singer/songwriter Patrick Mayberry never truly understood the power of worship music until he experienced it firsthand at a Passion conference. His YoungLife leader invited him to the annual gathering for college students, which has morphed into a larger movement that’s birthed some of Christian music’s most respected artists, such as Chris Tomlin, Crowder, Kristian Stanfill and Matt Redman. For many, Passion is a multi-day spiritual wake-up call to the things of God. For Mayberry, Passion was a transformational awakening to the intersection of faith and music. That was nearly 15 years ago. Today, Mayberry is on the cusp of embarking on an artistic journey he never quite felt qualified to pursue. Signed to Centricity Publishing as a writer since 2018, the Cookeville, Tenn. native has penned songs recorded by North Point Worship, David Leonard, Mack Brock, David Dunn, Jonny Diaz, Joel Vaughn and Chris Renzema, among others. In addition, he’s garnered sync placements with T-Mobile, NBA, the “TODAY” show and more. To date, Mayberry has released two EPs independently with 2018’s Joy and 2019’s Live In My Living Room, the latter of which he partnered with Centricity Music to re-release in 2020. Mayberry, his wife Jenny, and their four children recently relocated from Chicago to Franklin, Tenn., where he now remotely serves as Executive Producer of Worship for Chicago’s Soul City Church.