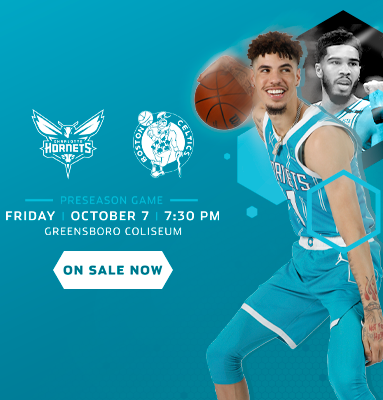 The Charlotte Hornets announced today that the team will host the Boston Celtics in a preseason home game at the Greensboro Coliseum on Friday, October 7, at 7:30 p.m.

The contest will mark the 10th time Charlotte’s NBA franchise has hosted a preseason game at the venue and the 13th time doing so in the Triad, most recently playing at Lawrence Joel Veterans Memorial Coliseum in 2019.

Tickets will go on sale to the general public at 10 a.m. on Wednesday, July 20, and can be purchased online at Ticketmaster or on the Hornets App or at the Greensboro Coliseum box office, which is open Thursday-Saturday from 12-5 p.m. Prices start at $12.50 plus applicable fees. Tickets for groups of 15 or more are available by calling the Hornets group sales department at 704-688-9047.

“We are excited to once again have the opportunity to play a preseason game in Greensboro,” said Hornets President & Vice Chairman Fred Whitfield. “The Triad has a great basketball history, and the fans show great support for the Swarm. We look forward to offering them an early preview of the 2022-23 Hornets team in a matchup against the defending Eastern Conference Champions.”