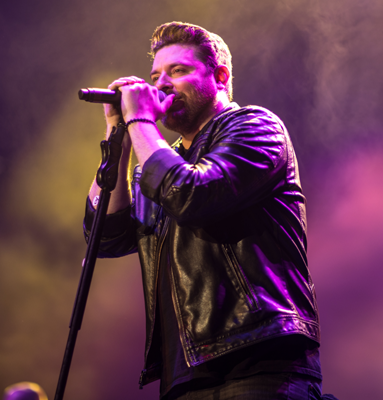 Following his induction into the Grand Ole Opry and the release of his acclaimed seventh album, Losing Sleep, 2017 was undoubtedly a career-defining year for platinum-selling entertainer Chris Young. 2018 is proving to be another banner year for the 32-year old neo-traditionalist. After a tremendous response to the initial winter run of his “Chris Young Losing Sleep 2018 World Tour,” playing five consecutive sold-out weekends of arena shows, and scoring his 10th No. 1 single, Chris has added 9 more shows, including his first-ever hometown headlining appearance at Bridgestone Arena in Nashville.  He will visit Greensboro, NC on Friday, September 28 at Greensboro Coliseum. Special guests Kane Brown and Morgan Evans will join him for the added dates.

Tickets and VIP packages can be purchased at ChrisYoungCountry.com, ticketmaster.com and the Greensboro Coliseum box office.

ABOUT CHRIS YOUNG: Recently inducted as the newest member of the iconic Grand Ole Opry, Chris Young achieved another milestone in 2017 with the release of Losing Sleep, his second consecutive studio album to debut at No. 1 on Billboard’s Top Country Albums Chart. At the age of 32 the RCA Records artist has ten No. 1 singles and seven albums to his credit, including the Platinum-certified Neon and 2015’s Gold-certified I’m Comin’ Over, which earned multiple ACM, BBMA, CMA, CMT, Grammy and RDMA nominations and scored three consecutive chart-topping singles. A prolific creator, Losing Sleep is Chris’s third project in less than two years and the title track is his eighth No. 1 as a songwriter.

Named “one of his era’s finest traditionalists” by the Associated Press, Chris has quickly become an international ambassador for country music, performing to packed houses around the world including the sold-out C2C Festival in the UK. With a hit-packed set that highlights his ten chart-toppers — including back-to-back No. 1s “Losing Sleep,” “Sober Saturday Night,” “Think Of You,” and “I’m Comin’ Over” —  and seventeen Gold/Platinum certified projects, he’s headlining the Chris Young Losing Sleep 2018 World Tour, with more than 40 arena and amphitheater dates into the fall.

ABOUT KANE BROWN: Breakthrough artist Kane Brown is climbing the charts with the RIAA Gold-certified “Heaven,” the newest single from his self-titled Gold debut, which stands as country’s #1 best-selling new-artist album debut since 2014.  With a robust, devoted fan base of over 3.5 million social subscribers, the RCA Records/Zone 4 recording artist has garnered over 320 million on-demand streams and over 100 million YouTube and Vevo views.  Released in December 2016, Kane Brown debuted at #1 on Billboard’s Top Country Albums and Top 10 on the Billboard 200 all-genre chart and became the #4 best-selling new-artist album debut of 2016, in any genre.  Kane Brown Deluxe Edition—a 15-song edition of his self-titled album—released in October of 2017, debuting at #1 on Billboard’s Top Country Albums and Top 5 on the Billboard 200.  Brown became the first artist ever to be #1 on Billboard’s five main country charts simultaneously, including Top Country Albums; Country Digital Song Sales (with the #1 debuting “Heaven”); and Country Airplay, Hot Country Songs, and Country Streaming Songs (with the Double-Platinum smash “What Ifs” featuring Lauren Alaina, which also ranks as the #1 most-streamed country song of 2018).  Brown earlier made chart history with the highest-debuting country EP of the Nielsen SoundScan era—2016’s Chapter 1—which featured the Platinum-certified “Used to Love You Sober,” the video for which earned a CMT Music Awards Breakthrough Video nomination.  www.kanebrownmusic.com

ABOUT MORGAN EVANS: Morgan Evans’ first U.S. single “Kiss Somebody,” co-written by Evans with Chris DeStefano (“That’s My Kind of Night”) and Josh Osborne (“Leave the Night On”), was the Top 3 most added single upon impact at country radio and debuted on Spotify’s Viral Chart at #15 in the US and #26 globally. Born and raised in Australia, the singer/songwriter is now chasing his dream halfway across the world. He has already begun receiving critical praise from outlets like Rolling Stone and Billboard and was recently selected as iHeartCountry’s first ever Australian “On The Verge” artist. Citing Keith Urban, Garth Brooks, Led Zeppelin and The Nitty Gritty Dirt Band as his formative influences, Evans has been crafting relentlessly hopeful and wholly infectious music since the age of 13. His raw talent and undeniable on-stage charisma earned him spots early in his career touring with artists such as Alan Jackson and Taylor Swift while still in Australia. Now having signed with Warner Music Nashville/Warner Bros. Records, Evans is bringing his engaging live show all over the world. Built around a loop pedal setup, it allows him to play solo with the presence and energy of a full band. Named an artist to watch in 2018 by outlets including Billboard, CMT, Pandora, SiriusXM, The Tennessean and more, Evans is currently in the studio working on his forthcoming album with songwriter/producer Chris DeStefano (Carrie Underwood, Brett Eldredge, Dan + Shay, Luke Bryan).