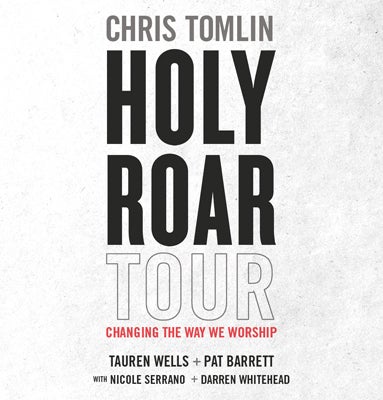 Grammy® winning singer-songwriter and one of the most successful Christian touring artists, Chris Tomlin, announced plans today for his 2019 spring tour, the Holy Roar Tour. The tour will come to Greensboro Coliseum on Apr. 7, 2019 with guests Tauren Wells, Pat Barrett and Nicole Serrano. Tickets will be available on Thursday, November 1 at 10am local times at www.christomlin.com.

“‘HOLY ROAR’ is the freedom, the experience, the wonder of worship. It is seeing the church come together, hands lifted to God, pouring out our praise with an eternal song in our hearts,” shares Chris. “It’s every voice together, changing the way we worship.”

This Friday, Chris will release a new album HOLY ROAR with a companion book Holy Roar: 7 Words That Will Change the Way You Worship out tomorrow.

Next month, Chris will launch Chris Tomlin Christmas: Christmas Songs of Worship Tour scheduled to run November 30 through December 16, 2018 where it will wrap at the Beacon Theater in New York City. Tickets for the Christmas tour are available now at www.christomlin.com.

Chris’ concert tours have sold-out venues in many major cities across the U.S. including New York City’s Madison Square Garden, The Forum in Los Angeles, Nashville’s Bridgestone Arena and Red Rocks in Denver, among others. His 2018 spring arena tour, “Worship Night in America Tour,” (WNIA) wrapped in May gathering over 175,000 during its six-week run. The WNIA Tour unofficially launched with the second annual sold-out ‘Good Friday Nashville’ concert event held at Bridgestone Arena.

Chris Tomlin is one of the most heralded singer-songwriters in the world who has amassed an impressive body of work. He has sold more than 8 million albums, 11.3 million digital tracks with 16 #1 singles. Chris is one of only four artists ever to receive the Sound Exchange Digital Radio Award for over 1 Billion digital radio streams, others include Justin Timberlake, Pitbull and Garth Brooks. The Grammy® winner’s list of music awards include an American Music Award, 3 Billboard Music Awards, 21 Dove Awards, a BMI Songwriter of the Year Award and more. Chris’ concert tours have sold-out venues in major cities including New York City’s Madison Square Garden, The Forum in Los Angeles, Nashville’s Bridgestone Arena and Red Rocks in Denver, among others. This spring, Chris launched his own imprint record label, Bowyer & Bow, in partnership with Capitol Christian Music Group.