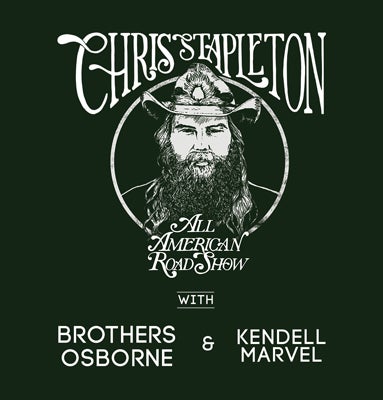 Chris Stapleton will continue his extensive, sold-out “All-American Road Show” through 2019 with newly confirmed performances this summer and fall. The shows will kick-off July 9 at Allentown’s PPL Center and will span through November 2 at Louisville’s KFC Yum Center.

Stapleton Fan Club pre-sales will begin Tuesday, January 29 at 10:00am local time. For more information visit www.stapletonfanclub.com. Public tickets for the newly announced concerts begin Friday, February 1 at 10:00am local time at livenation.com, Ticketmaster, or by phone 800-745-3000. Live Nation is the official promoter of the All-American Road Show.

Released in December 2017 on Mercury Records Nashville, From A Room: Volume 2 takes its name from Nashville’s historic RCA Studio A (the capital “A” in “From A Room”) where it was recorded with Grammy Award-winning producer Dave Cobb. Along with Stapleton on vocals and guitar and Cobb on acoustic guitar, the album features Morgane Stapleton on harmony vocals as well as longtime band-members J.T. Cure on bass and Derek Mixon on drums.

In addition to his work as a solo artist, Stapleton is also featured on Justin Timberlake’s “Say Something.” The music video—which was filmed in a single shot at L.A.’s historic Bradbury Building—has been viewed over 287 million times. Watch here.