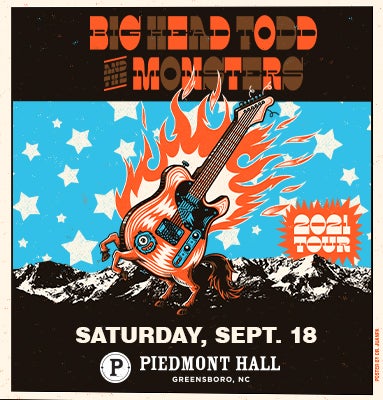 Big Head Todd and the Monsters will play Piedmont Hall at the Greensboro Coliseum Complex on Saturday, Sept. 18.

Tickets will go on sale to the general public on Tuesday, May 11 at 10 a.m. at Ticketmaster. VIP ticket packages for the Big Head Todd and the Monsters ‘Carolina Fan Fest’ at Grandover Resort - which includes tickets to the Sept. 18 show at Piedmont Hall – are available here.

Big Head Todd and the Monsters are not that big on anniversaries, so there won’t be any big hoopla over the fact that the band is officially crossing the three-decade mark this year. Thirty years would seem like something to commemorate, especially with the same core lineup, an achievement few other name-brand bands can boast of. Yet right now they’re less about celebrating stability than volatility, in the form of their eleventh studio album, New World Arisin’, which makes good on its forward-facing title with what might bethe brashest rock and roll of their career. The old world can’t rest on any laurels, and neither will they.

“We’re in a real exciting part of our career right now,” says co-founder Todd Park Mohr. “We’re a viable band with a great audience and we’re able to work at a very high level. It’s a career that’s getting more and more interesting, rather than less, which is remarkable,” he says, chuckling at the unlikelihood of anyone being this cheerfully all-in, this far in. “I mean, 30 years into it, I really feel like: Wow, this is getting fun. I’m learning more about music and about my instrument, and it’s just really engaging in every way. We also dovetail well with the times, I think; I feel like we have something to say.”

That desire to communicate and connect is very much reflected in a new album that explores a variety of subgenres, from the funky (“Trip”) to the unexpectedly punky (“Detonator”), with stops along the way for raging country-rock (“Damaged One”), expansive storytelling in the Van Morrison/early Springsteen mode (“Wipeout Turn”), a Jimi Hendrix cover (“Room Full of Mirrors”), and, in the title track, “New World Arisin’,” a Charley Patton-inspired tune that ended up having what Mohr describes as “a heavy metal/gospel feel.”