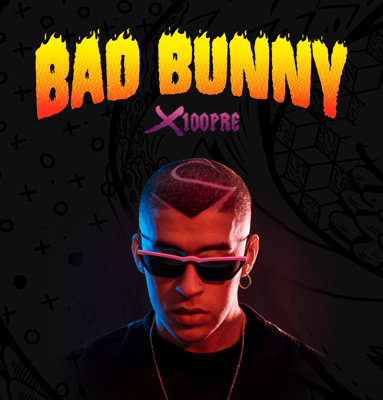 On the heels of his highly-successful tour, GRAMMY-nominated rapper-songwriter and Latin music’s “King of Trap,” Bad Bunny, is announcing the extension of his North American X100PRE Tour Presented by Corona Estéreo Beach. Kicking off this fall in Boston on October 25, the more than 20 plus stop tour produced by CMN Entertainment will make stops in Newark, Washington D.C., Atlanta, Las Vegas, San Diego, San Antonio, Houston and more, and will conclude in Tampa on December 8.

Bad Bunny has had a remarkable start to 2019, from releasing his chart-topping debut LP “X100PRE” in late December to kicking off his highly-praised X100PRE tour in March with sold out shows in Miami, Portland, Seattle, Chicago, Austin and Dallas. The high-energy tour, which still has upcoming shows in markets like Orlando, Los Angeles and New York City among others, has received praise from critics, with reviews highlighting the 360-degree mappable LED stage that gives his audience views of him from any point in the arena, videos that give a deeper glimpse into his journey of becoming Bad Bunny, and surprise performances from some of Latin music’s hottest artists like J Balvin, Becky G, Farruko and Zion of Zion y Lennox.

As part of the tour partnership with the brand, Corona Estéreo Beach will bring a sensory experience - building a vibe around the mindset of relaxing with friends and creating an energetic environment alongside the reggaeton sounds of Bad Bunny that will get everyone moving.

“I’m thrilled to have Corona join me on my X100PRE Tour to give my fans a taste of Corona Estéreo Beach and showcase their support of Latin music,” It’s not solely about the music – it’s about the culture, creativity, and contributing to the movement that connects us all together” says Bad Bunny.

The vibrant concert atmosphere will offer exclusive access to custom Corona branded experiences for fans across the country, while immersing music lovers in the carefree Corona lifestyle.

“We’re thrilled for Corona Estéreo Beach to go on the road with Bad Bunny on his X100PRE tour this year,” said Ann Legan, Vice President of Brand Marketing, Corona.  “As a brand that has been celebrating music for years, the relationship with Bad Bunny allows Corona Extra to continue building equity while reaching a core shared audience with one of the hottest Latin artists out there.”

Pre-sale tickets will be available starting April 11 and tickets for the general public will go on sale on April 12 (Varies by market). To buy tickets and see the full tour schedule visit www.cmnevents.com.

Bad Bunny, originally from Puerto Rico, is most recognized for his explosive and infectious trap songs. Rolling Stone magazine has named him "The Four-Billion-Stream Man leading the Latin Trap Explosion." This talented artist has demonstrated his already overwhelming power, influence and demand with completely sold-out concerts for his "La Nueva Religión Tour" (The New Religion Tour) all over Europe, Latin America and the U.S. His unmistakable voice and rhythm have led him to transition to the general market, where he is already creating waves of revolution with his participation in "I Like It" alongside Cardi B and J Balvin, which reached #1 on Billboard's Hot 100 chart and has continued to dominate the chart in the top 3 position. He has been nominated to the iHeart Radio Music Award, MTV VMA's, Latin AMAs, Latin GRAMMYs, and E! People Choice Awards. Earlier this fall, Bad Bunny celebrated being the face of the cover of FADER magazine where the artist boasts a feature story that perfectly recaps his story and properly introduces him to the American market as the Latin trap superstar he has become.