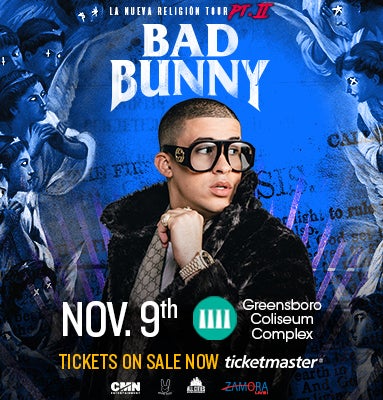 After a historical year in 2017, the urban music sensation BAD BUNNY will bring his first North American tour, "LA NUEVA RELIGIÓN" to Greensboro Coliseum on Friday, Nov. 9 at 8 p.m.

Bad Bunny comes into 2018 with full force and style. Just in the first week of the year, he was awarded with having five of his songs in Billboard’s Hot Latin Songs chart magazine. He was also featured in an article in the 2018 Predictions section that explores how he has taken Latin Trap to the forefront of the urban genre around the world. Bunny also celebrated receiving a nomination to the iHeart Radio Music Awards in the category of "Best New Latin Artist."

Benito Antonio Martinez Ocasio, better known as “Bad Bunny” is a young urban music singer, known for his Trap Latino singles. He was born on March 10, 1994 in San Juan, Puerto Rico. He is characterized as being creative and versatile and has written most of the lyrics for songs he has produced. He was captivated by music at an early age, being surrounded by music since the moment he was born. His passion led him to learn and perfect his talent all on his own. His love and passion led him to create songs and upload them to YouTube and other social networks. He first started recording as an independent artist, while working at a supermarket. During that time he caught the attention of DJ Luian when he released his single “Dale” on SoundCloud. DJ Luian then signed him to his record label “Hear the Music” and introduced him to a host of well-known Latin artists. He has achieved unparalleled success with singles such as “Diles,” “Soy Peor” y “Tu No Vives Así,” and has dominated the digital music world, reaching more than half a billion views for his videos on YouTube, sitting atop popularity lists on all digital music platforms, and selling out concerts throughout the world.