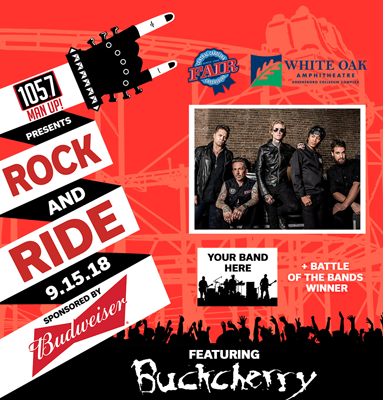 A limited number of reserved tickets will go on sale Friday, August 10 at 11 a.m. at www.ticketmaster.com and the Greensboro Coliseum box office. Reserved tickets are $20 and include admission to the Central Carolina Fair.

Gates will open at 5:30 p.m. and the concert will begin at 6 p.m. with a performance by 105.7 Man Up’s ‘Battle of the Bands’ contest winner. If you’re in a band, check out 105.7 Man Up’s Battle of the Bands,
where you could be opening for Buckcherry! Submit your audition video now at 1057ManUp.com/ride.  You have until August 26th to send your best stuff.

For nearly two decades, Los Angeles’ notorious, multi-platinum-selling rock band Buckcherry has thrived thanks to its arsenal of rock anthems that teem with riotous energy. The Grammy Award-nominated outfit is responsible for smashes including “Lit Up” off their gold-certified 1999 self-titled debut as well as and “Sorry” from 2006’s platinum 15. Along the way, they’ve shared stages with everybody from AC/DC and Mötley Crüe to Slipknot and Rob Zombie, among others.