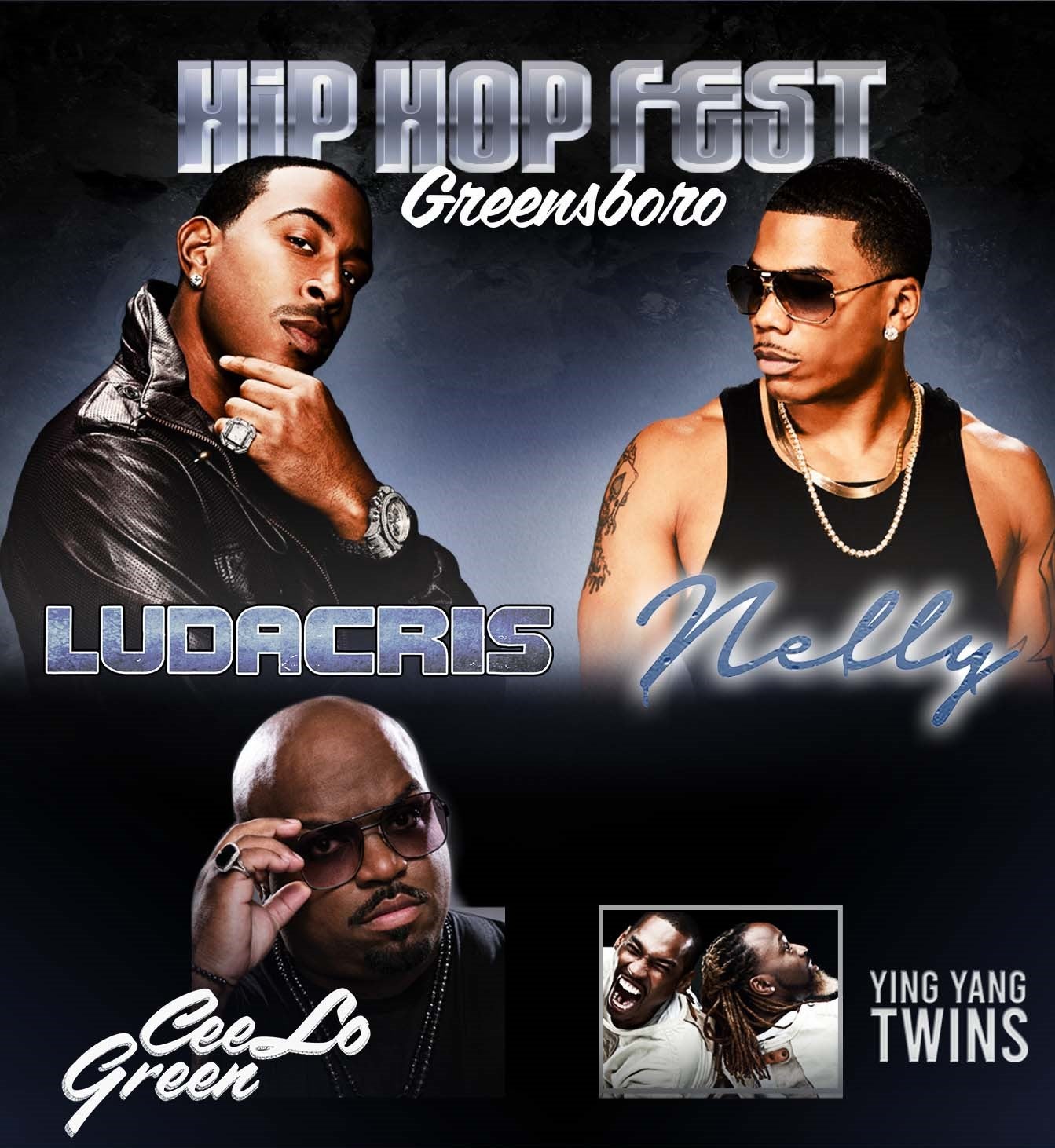 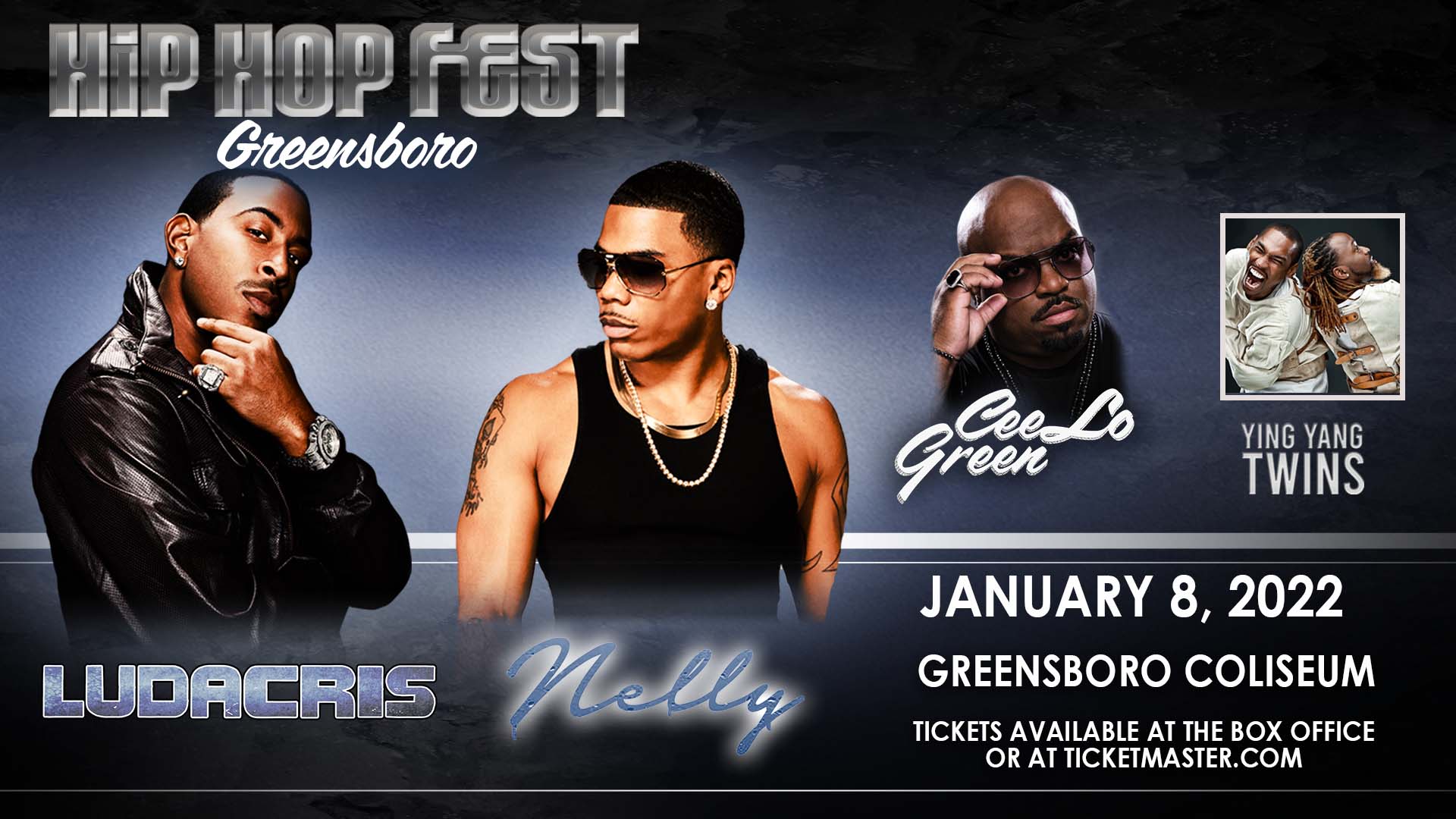 The Greensboro Hip Hop Festival featuring GRAMMY® Award-winning rap superstars Ludacris and Nelly along with CeeLo Green and Ying Yang Twins is coming to the Greensboro Coliseum at 8 p.m. on Saturday, January 8, 2022.

When rap’s Dirty South movement broke nationwide in the late `90s and early 2000s, Ludacris rode it to immediate widespread popularity, becoming arguably the most commercially successful Southern rapper of the time. The three-time GRAMMY® Award-winning rapper scored hit after mainstream hit and selling platinum numbers of records like 2001’s Word of Mouf, which charted at #3 on the Billboard 200 and spawned a series of hit singles including “Area Codes,” “Rollout (My Business),” “Saturday (Oooh Oooh!),” “Welcome to Atlanta” and “Move Bitch.” 2003’s Chicken -N- Beer was his first album to reach #1 on the Billboard 200, which brought another series of hits, including the Hot 100 #1 “Stand Up” and #6 “Splash Waterfalls.” He quickly became a multifaceted superstar, making multiple film and television appearances while staying active in music with consistent guest features on other artists’ tracks and albums of his own like 2015’s Ludaversal. In September 2020, the new single “Found You” arrived featuring a guest spot from Chance the Rapper.

Nelly is a Diamond selling, multi-platinum, GRAMMY® Award-winning rap superstar, entrepreneur, philanthropist, and TV/Film actor. He has been certified Gold and/or Platinum in more than 35 countries, with estimates bringing his total record sales to over 40 million sold. Nelly has continually raised the bar for the entertainment industry since stepping on the scene in 2000 with his distinctive vocals and larger-than-life personality. Some of his biggest music hits include: “Hot in Here,” “Dilemma” (featuring. Kelly Rowland), “Country Grammar,” “Ride Wit Me,” “Just a Dream” diamond status “Cruise,” “The Fix” (sampling Marvin Gaye) and “Millionaire” with Cash Cash and Digital Farm Animals. The music Icon has been awarded two Diamond selling titles, one for Country Grammar and one for his song “Cruise” with Florida Georgia Line – a title only shared by six other rap artists.

The Ying Yang Twins debuted in 2000 and rose to mainstream popularity in 2003 collaborating with Britney Spears and releasing a slew of party anthems and club hits including “Salt Shaker,” “Wait (The Whisper Song),” “Badd” and more. The duo was featured on Lil Jon & The East Side Boyz hit single “Get Low,” which reached no. 1 on the Billboard Hot 100.