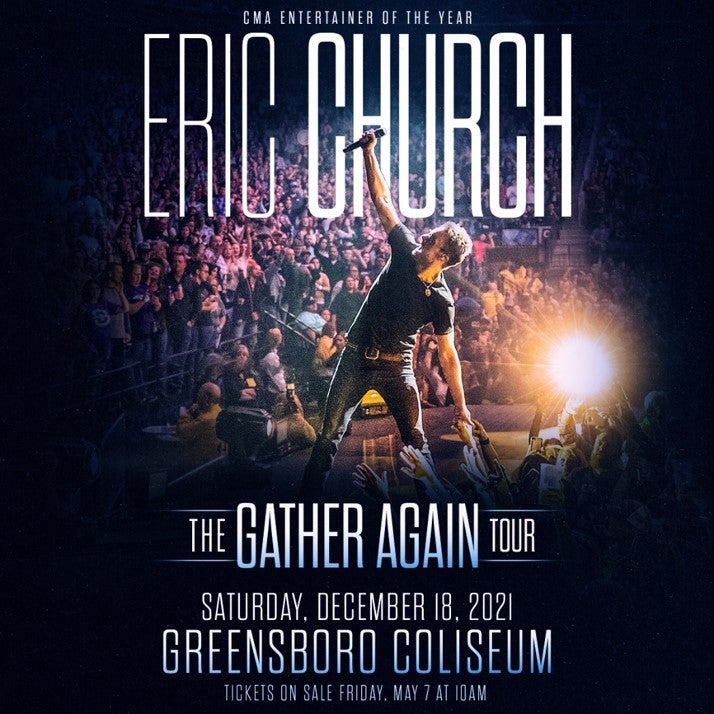 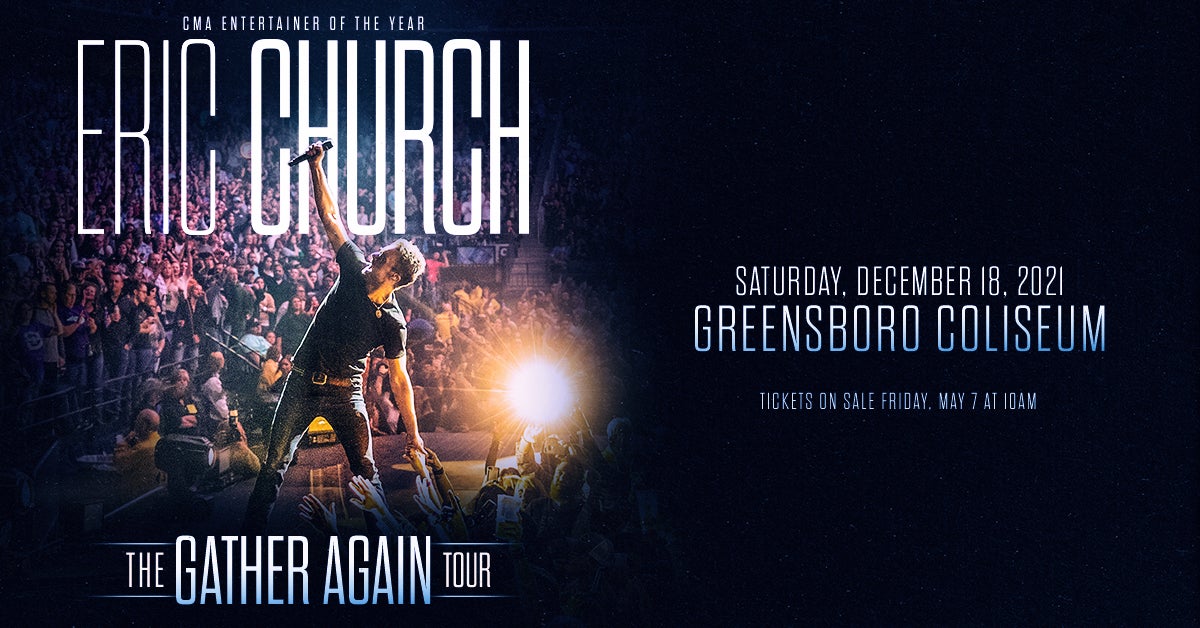 Reigning CMA Entertainer of the Year and current ACM Entertainer of the Year nominee Eric Church has his sights set on a return to the road with the announcement of a full arena tour. The Gather Again Tour will kick off this fall and visit 55 cities throughout the U.S. and Canada, including a Dec. 18, 2021 stop at Greensboro Coliseum.

Making the most of the long-awaited opportunity to “gather again,” for the first time in his career Church will adopt an in-the-round set up, with the stage at the center of each arena floor in order to accommodate as many fans as possible.

Making the most of the long-awaited opportunity to “gather again,” for the first time in his career Church will adopt an in-the-round set up, with the stage at the center of each arena floor in order to accommodate as many fans as possible.

Reigning CMA Entertainer of the Year and 10-time GRAMMY nominee Eric Church has spent the past year releasing new music at a relentless pace; providing a glimpse into the results of a marathon session during which he spent nearly a month writing and recording a song per day – including current Top 15 single “Hell of a View” – while sequestered in a rural North Carolina cabin, and fueling speculation of his highly anticipated new three-part project, Heart & Soul, set for release this month.

Just as unique as Church’s approach to recording and releasing music is his tenacity on the road. During his most recent outing, 2019’s Double Down Tour, Church played back-to-back nights of two unique shows in each market sans opening act, giving every city’s fans six-plus hours of his iconic music. The tour also featured a massive stop at Nissan Stadium in Nashville, where he broke the venue’s concert attendance record with more than 56,000 fans in attendance and became the first artist to sell out the venue with a solo lineup. Church also recently took to the field at Tampa Bay’s Raymond James Stadium to perform the National Anthem with R&B star Jazmine Sullivan ahead of Super Bowl LV and will return to the road for The Gather Again Tour in the fall.

A seven-time ACM Award winner, four-time CMA Award winner, and 10-time GRAMMY nominee, Church has amassed a passionate fanbase around the globe known as the Church Choir as well as a critically acclaimed catalog of music. His most recent album, Desperate Man, earned a GRAMMY nomination for Best Country Album (his third nod in the category) and produced his most recent No. 1 hit, “Some Of It.” Previous releases include the Platinum-certified Sinners Like Me (“How ’Bout You,” “Guys Like Me”), Carolina (“Smoke a Little Smoke,” “Love Your Love the Most”) and Mr. Misunderstood (“Record Year,” “Round Here Buzz”), the Double-Platinum certified The Outsiders (“Like a Wrecking Ball,” “Talladega”) and the 3x Platinum-certified Chief (“Springsteen,” “Drink In My Hand”), as well as 22 Gold, Platinum and multi-Platinum certified singles.